What Amazon's Whole Foods Purchase Means for the Future of Retail

Do you remember the furor that exploded when we all began to realize the serious impact that Amazon was going to have on the future of book retailing? It seems like a long time ago now. And besides, disrupting the paperback market may have been where it all started for Amazon, but it certainly wasn’t where the story ended.

And now we are faced with the opening of a new chapter. On June 16th, Amazon announced that it would be buying organic grocer Whole Foods Market in a deal valued at about $13.7 billion. The move catapults the ecommerce giant straight into over 450 physical locations, and immediately fulfils its long-held desire to sell more groceries.

“Millions of people love Whole Foods Market because they offer the best natural and organic foods, and they make it fun to eat healthy,” Amazon Founder and CEO Jeff Bezos said in a statement.

“Whole Foods Market has been satisfying, delighting, and nourishing customers for nearly four decades – they’re doing an amazing job and we want that to continue.”

That’s all well and good, but the immediate implications for the grocery industry are huge – and there’s more than a whiff of fear coming from retailers of all stripes as the potential ramifications begin to sink in.

Because competing with Amazon is a terrifying prospect for any incumbent business. This is primarily due to the fact that Amazon operates on a radical model whereby it doesn’t make any money – and that’s a big problem for every other grocery chain, which has to contend with razor-thin margins already.

The fear is that Whole Foods will almost certainly accept lower profit margins under Amazon – and that spells all sorts of trouble for competitors.

Today, Whole Foods is considered to be a slightly upmarket store – which is another way of saying that it’s a nice place to shop, but expensive. But if profits all of a sudden cease to be a concern, this issue is very simply addressed by making things cheaper. Then, as reduced prices will almost certainly increase demand, more locations are sure to follow.

Whole Foods competitors could very soon be potentially forced into a price war where they find themselves essentially unarmed – when a player who doesn’t care about margins enters a market, the consequences will surely be devastating to its competitors who have to.

Even without delivering profits, Whole Foods could nonetheless deliver additional value in other ways.

Are we to see, for instance, some sort of scenario where Whole Foods customers might be required to “log in” with their Amazon Prime accounts to access discounts in store? That would deliver megatons of new user data that Amazon could exploit in other areas of its business – not to mention a potential surge in Amazon Prime membership signups. More simply, the stores also present useful channels through which Kindles, Fire TVs, Echoes and other Amazon hardware can be sold.

But let’s think about those stores for a moment.

Amazon has just acquired overnight a national physical presence, and a network of mini-distribution centers for fresh produce (and potentially everything else) to boot. And if Amazon decides to use groceries as a means to increase the frequency of home deliveries, it’s not hard to imagine what other types of products it could pile into home delivery vehicles (not to mention the customer pickup option that just landed on the table). The last-mile logistics obstacle for fresh food deliveries may just have taken a giant leap towards being solved.

But here’s the real worry for the retail sector at large.

If Amazon can acquire its way into groceries – with all the tech and budget in the world to reinvent the sector as it sees fit – what’s to stop it from muscling into drug stores, electronics stores, department stores, appliance stores, or anywhere else?

To have any hope of remaining competitive if an acquisition spree were to take hold in other segments of the retail industry, all players operating today need to establish means to reinvent themselves – fast.

Amazon clearly doesn’t want to remain an ecommerce-only outfit forever. And indeed, as we see more and more online-only startups invest in physical spaces – coming on the heels of the past decade’s surge of traditional retailers getting to grips with digital commerce – it seems that retailers now know that they cannot survive through either ecommerce or bricks-and-mortar alone.

What’s needed is a combination of both.

This is an enormous task for many retailers to accomplish – but the stakes have just been raised, and, sadly, a large number will undoubtedly fail the transition.

What we must remember when we look back is the fact that Amazon not only changed the way books were sold, it even changed how they were made.

Publishers, authors, and everyone else along the supply chain had to cut their costs to deal with the new Amazon model – and that was even before the Kindle came along.

The same thing could be just about to start happening in food, with food manufacturers facing the same struggles as book publishers did, and competing stores squeezed out of profitability. We await to see the outcome over the coming 12-24 months.

In the meantime, we ask – who’s next?

Summing up the potential disruption most succinctly, the last word goes to Michael Pachter, an analyst at Wedbush Securities Inc:

Get The eTail Boston Conference Agenda 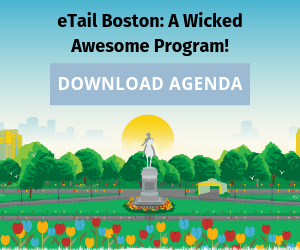 Amazon vs Walmart: The Battle for the eCommerce Crown

Google Shopping Has Evolved into a Serious eCommerce Platform